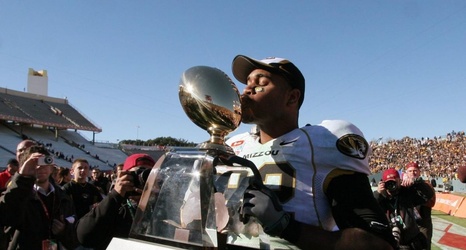 This is the latest in a series of stories highlighting the top 30 Mizzou athletes Dave Matter has covered in his time writing about the Tigers since the late 1990s. The series will run every day Monday through Fridays.

He was in the state of Missouri at a recruit’s home, but he when looked around he realized he was in enemy territory: From wall to wall, nothing but Nebraska scarlet. Pinkel leaned over and told assistant coach Andy Hill, “We don’t have a chance.”

The Missouri Tigers had enough trouble beating Nebraska on the field — something they hadn’t done since 1978 — and here were a couple Mizzou coaches visiting the Rucker house in St.