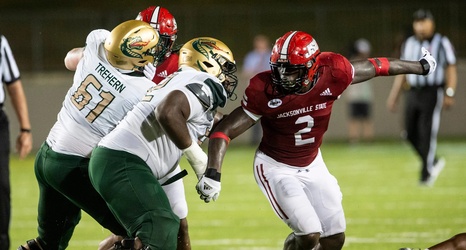 It’s never too late to add impact players to the roster.

On Thursday afternoon, defensive end transfer DJ Coleman tweeted that he’d be committing to play at Missouri for the 2022 season.

Coleman comes with quite the resume. He was a Second Team FCS All-American in the 2021 spring season and was named to all conference teams in each of his three seasons at Jacksonville State. He also led JSU in tackles for loss and sacks in 2021.

In theory, Mizzou has quite a bit of talent available at defensive end. Trajan Jeffcoat is a former All American, Isaiah McGuire had a breakout 2021 and talented youngsters like Arden Walker and Travion Ford are chomping at the bit for snaps.