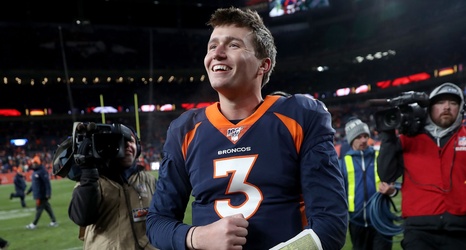 Drew Lock made his first NFL appearance Sunday and the rookie quarterback picked up a victory in his first start.

Not only that, but his first NFL touchdown will be quite memorable.

The Broncos won the game 23-20, but Lock also got the No. 1 play on SportsCenter’s Top 10 plays from Sunday with his first-ever NFL TD. He hit wide receiver Courtland Sutton in the end zone on a 26-yard pass for a 7-0 lead over division rival Los Angeles Chargers.

Later in the quarter, Lock nailed Sutton in the back of the end zone for a second score.