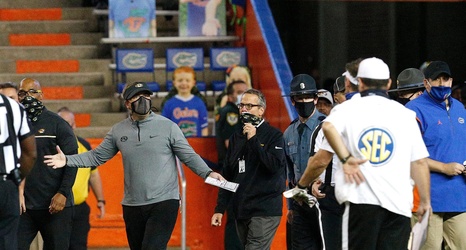 As the COVID-impacted College Football world turns, you never know week-to-week what will happen, who will be available, and which team will feature enough players to play a football game.

And it turns out, this weeks victims are the Arkansas Razorbacks, who were supposed to play in Columbia this weekend in the annual post Turkey-Day TRADITION™ “Battle-Line”™ presented by Shelter Insurance™. From the release:

The Arkansas at Missouri football game of November 28 has been postponed, resulting in rescheduling of games that include Vanderbilt playing at Missouri on November 28 and the postponement of the Tennessee at Vanderbilt game originally scheduled for November 28.