Alabama is too much for Mizzou in Drinkwitz's debut 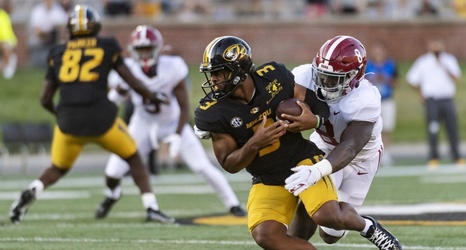 COLUMBIA, Mo. — Coach Eliah Drinkwitz stayed true to his promise to keep his quarterback choice a secret leading up to Saturday’s game against Alabama. Missouri’s first suspenseful preseason quarterback competition since a teenaged Brad Smith edged senior Kirk Farmer for the job 18 years ago, remained a mystery until the season’s kickoff.

Would it be Shawn Robinson, the former Big 12 starter, or Connor Bazelak, the redshirt freshman last seen starting against Arkansas in the final game of the Barry Odom regime?

The answer came 54 seconds into the season — and mostly was a footnote the rest of the night.