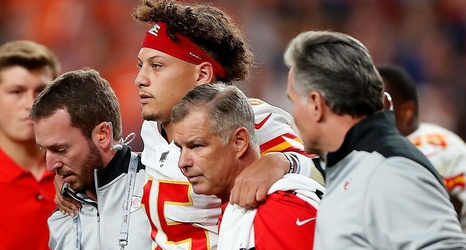 DENVER -- Kansas City Chiefs quarterback Patrick Mahomes was ruled out of Thursday night's game against the Denver Broncos after suffering a right knee injury in the second quarter.

Mahomes was injured on a quarterback sneak on fourth down with just over nine minutes remaining in the first half. As medical staff attended to him on the field, it appeared Mahomes' knee was straightened and popped back into place.

A cart came on to the field, apparently to take Mahomes from the field. He was instead helped off the field by a couple of trainers.