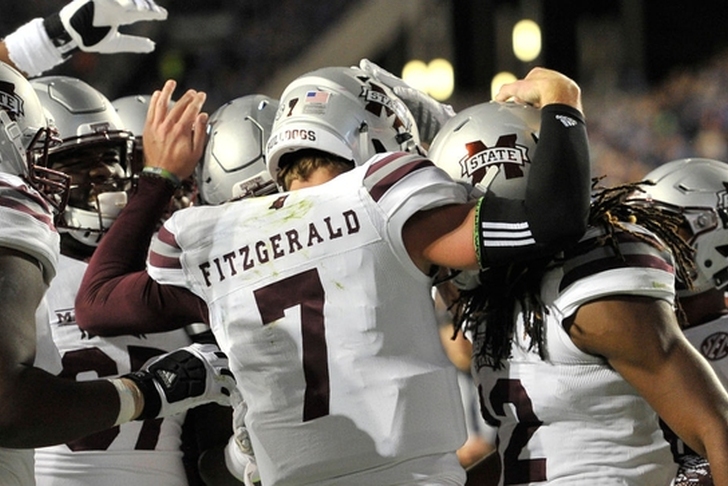 The Texas A&M Aggies were the biggest surprise of the initial College Football Playoff rankings when it was revealed that they are ranked #4 in the country. Now, their hopes of making the playoff are gone.

They went into Starkville and fell behind early, as the Mississippi State Bulldogs used a dominant rushing attack to pull off the stunning 35-28 win over the Aggies.

The Bulldogs accounted for 572 yards of total offense against Texas A&M - including a jaw-dropping 363 yards on the ground - as they got the victory. Quarterback Nick Fitzgerald carried the load for Mississippi State, going 18/31 passing for 209 yards, two touchdowns and two interceptions while rushing for 184 yards and two more touchdowns on 19 carries.

Fitzgerald also set the tone early, reeling off a stunning 74-yard touchdown run to give the Bulldogs an early lead:

Mississippi State's lead went to 14-0 thanks to a short TD run from running back Aeris Williams, but the Aggies looked like they were starting to gain control of the game when quarterback Trevor Knight ran 19 yards for a touchdown of his own.

However, that optimism what short lived for Texas A&M. Knight hurt his shoulder on that play and was never able to return to the game. With the Aggies' offense stagnated with backup Jake Hubenak under center, and Mississippi State took advantage.

Fitzgerald threw two long touchdown passes to start off the second quarter, and just like that, the Bulldogs had a commanding 28-7 lead.

Texas A&M managed to get within 28-21 in the fourth quarter after Hubenak found Christian Kirk for a 54-yard touchdown, but the Bulldogs didn't panic. Fitzgerald led a a drive that took 7:34 off the clock, which he capped off with an outstanding four-yard touchdown run.

The Aggies added another touchdown in the final two minutes and had the ball with a chance to tie to game in the final minute, but Hubenak through an interception with 14 seconds remaining.

Along with Fitzgerald's big day, Williams finished with 140 yards and a touchdown on 22 carries to lead Mississippi State.

Hubenak completed 11/17 passes for 222 yards, two touchdowns and that interception. Kirk also played will for the Aggies, catching seven passes for 144 yards and a touchdown. He also returned a punt for a touchdown, which is the fifth of his career (a Texas A&M record).