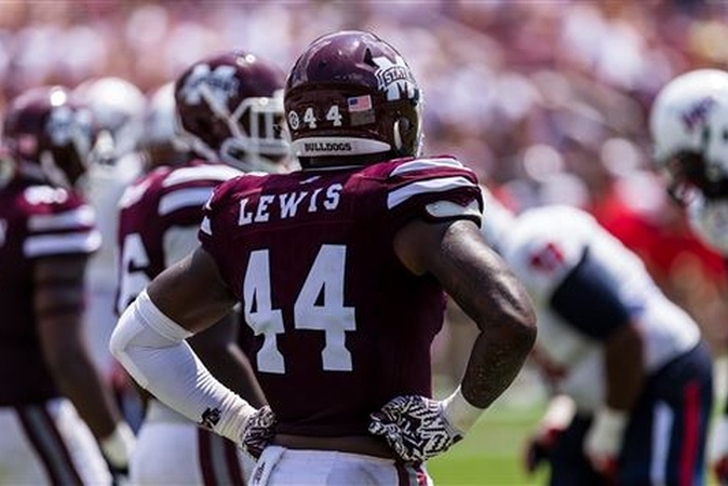 Mississippi State linebacker Leo Lewis was one of the most sought-after recruits in the 2015 class as the top ranked inside linebacker in the country, receiving interest from essentially every SEC school. However, that recruitment took on many illegal aspects that are now coming to life.

The Brookhaven, MS native was at the center of a recruiting war between the two in-state powers before deciding on the Bulldogs, and is now telling NCAA investigators that he received over $10K from both Mississippi State and Ole Miss, according to SB Nation's Steven Godfrey.

As part of the NCAA's investigation into former Ole Miss head coach Hugh Freeze, Lewis was granted "limited immunity" that will keep him eligible to play as long as he is truthful with them. That has turned Lewis into an open book.

Then Lewis started talking. About money. About free hotels, free rides to visit college campuses, hundred-dollar handshakes, free apparel, and even more money, bags of cash he says he received from multiple SEC programs totaling over $21,000 during the final week before National Signing Day in February 2015.

Lewis said he took multiple unofficial visits to Ole Miss and rarely had to pay for anything and received a $10K cash payment from a booster - even though he never really considered the Rebels.

He told the group (NCAA investigators, his lawyers, and Ole Miss lawyers and reps) he had never intended on signing with Ole Miss and that as he took the payment, he was still deciding between LSU and Mississippi State. Lewis was then pressed by a lawyer for Ole Miss as to why he took the money.”

Though Freeze has been tied to several escort services - the main reason for his firing - Lewis said that he was never set up with a female.

He also admitting to taking at least $11K in benefits from Mississippi State, and Godfrey says Lewis may have received cash offers from all the schools he was considering for his commitment.

Sheridan asked Lewis which schools offered money to Henderson and which schools she took money from. Lewis’ answers are all redacted. Lewis told the NCAA he received $11,000, $1,000 up front and $10,000 shortly after National Signing Day, all from the redacted school.

Ole Miss alleges that Mississippi State is that school, which means they gave him over $22K in total.

It should be noted that Lewis' "limited immunity" does not extend to the Mississippi State program. This investigation is centered on Ole Miss, but his answers suggest the NCAA may come after the Bulldogs next.

On the field, Lewis is expected to start for Mississippi State this season. He recorded 79 tackles with five tackles for loss and a sack last season.

Follow our SEC page for all the latest SEC football news!