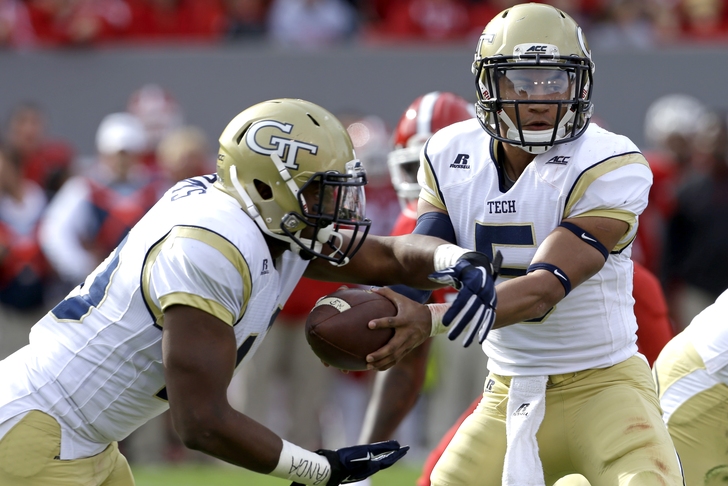 The highest-scoring offense in the ACC this season didn't disappoint on New Year's Eve, as the #12 Georgia Tech Yellow Jackets used their vaunted read-option attack to run the ball right through the heart of the #7 Mississippi State Bulldogs' defense en route to an impressive 49-34 victory in the Orange Bowl.

It seemed as if Mississippi State QB Dak Prescott had changed the complexion of the entire game with a heave-and-a-prayer Hail Mary that was hauled down by sophomore wide receiver Fred Ross at the end of the half, slicing GT's lead to 21-20.

However, that wasn't to be.

Yellow Jackets senior RB Synjyn Days broke free of containment less than a minute into the third quarter, streaking to pay dirt on a 69-yard TD run. That was the first seven of a 21-0 third quarter for Georgia Tech, as they ballooned their lead to 42-20 heading into the final 15 minutes.

Mississippi State is now 0-22 since the 2004 season when giving up 21 points or more in the first half, per ESPN Stats & Info.

It didn't matter that Thomas threw just twelve times (including a TD pass). All that matters is that head coach Paul Johnson's boys stuck with the program - the primary reason why Georgia Tech's offense set an Orange Bowl record with 452 total rushing yards.

Dak Prescott (33-of-51, 453 yards, 3 TDs, 1 INT) did everything he could to keep the Bulldogs within sniffing distance in this one, despite not really being able to break things out with his legs (15 carries, 47 yards). The junior signal caller had a great year nonetheless, and showed no quit with MSU's backs against the wall on Wednesday.

Georgia Tech has a solid shot of finishing with a top-10 ranking, posting an 11-3 record with impressive wins over Clemson, Georgia, and now Miss. State, to their credit.

Dan Mullen's Mississippi State team has very little to hang their heads about either, finishing 10-3 and picking up the program's first ten-win season since the 1999 squad posted a 10-2 record. However, after carrying a #1 ranking into Tuscaloosa earlier this year, that may not be enough to keep a bad taste out of their mouths.