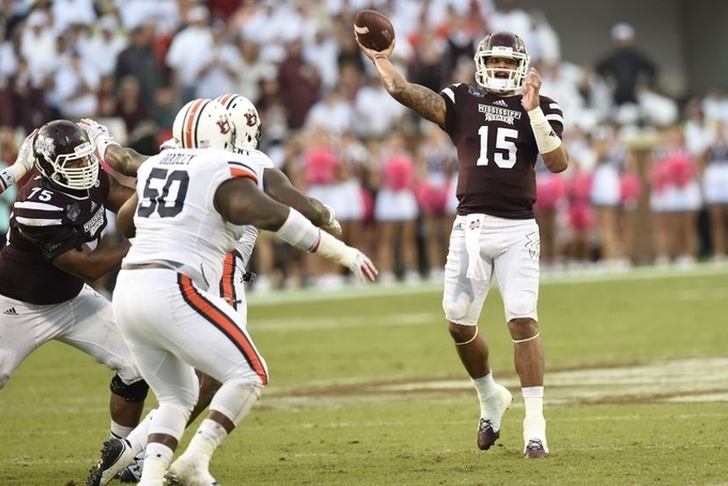 The Auburn Tigers seemed to be the victims of an LSU beatdown hangover on Saturday, looking listless and out of sync for large chunks of their 17-9 home loss to the Mississippi State Bulldogs. Was this a case of an Auburn swoon or a masterful job by the Bulldogs? Here's 3 Things We Learned From Mississippi State's 17-9 Win Over Auburn.

There's no getting around this. When it's not one thing with this Tigers team, it's another. Today, the offense looked crisp at times with Jeremy Johnson's replacement, Sean White, under center and the running game looked more than solid with Peyton Barber leading the charge. However, the Tigers continue to be snake-bitten in the clutch, with a missed field goal and a Sean White interception taking what could have been 10 points off the board in a game where points were at a premium.

Auburn's better than this, talent-wise. They just seem to be missing a cohesive spark that could push their talent from impressive on an individual level to championship-caliber on a team level.

That, or a Bama fan is wielding a voodoo doll right now. Or Mississippi State's defense is THAT GOOD (as it was in the clutch on this night.)

The box score says Mississippi State ran the ball over 10 times, but we really can't remember any of those plays. The Bulldogs' entire offensive philosophy is built on Dak Prescott dropbacks resulting in everything from short swing-pass gains to big-timers over the top. In a way, the Bulldogs are the anti-norm when it comes to SEC teams -- passing the ball to control the clock rather than relying on a blue-chip rusher to do the dirty work.

It's working for Mississippi State so far during their 3-1 start. It remains to be seen whether they can keep it going for the remainder of the season.

QB Sean White made most of the throws asked of him in this one. The problem was that said throws were for negligible gains and were mainly there to set up the rushing game. They didn't stretch the field, nor did they place Miss. State's secondary members on their heels. The feeling we get from this game is that Auburn's entire offensive philosophy needs a good looking-at. While we're not calling for Gus Malzahn's head, we're going to be very interested to see how the Auburn Nation reacts if the past two weeks' struggles snowball into a disastrous mess over the next few month.