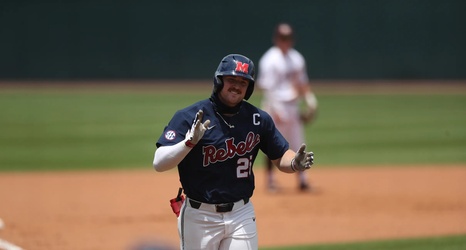 Ole Miss came back from its disappointing loss on Friday night to even the series against Texas A&M on Saturday with a 12-7 win at Blue Bell Park.

Doug Nikhazy had some trouble with his command early, surrendering multiple free passes and two Aggie runs that looked like would give the Rebels trouble in the middle innings. HOWEVER, Ole Miss (33-13, 14-9) tied the game in the fifth and went on to open up a 12-2 lead before some late A&M runs narrowed the gap before the final pitch.

In the short term, the biggest story of the day was Tim Elko’s three-run bomb in what was a seven-run seventh inning.