Despite loss to No. 5 Florida, Ole Miss’ new-look offense shines 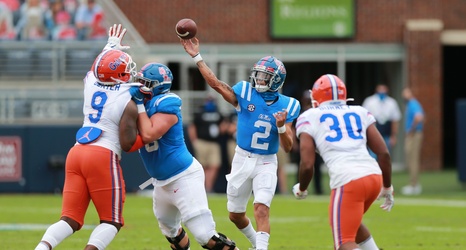 As time expired inside Vaught-Hemingway Stadium on Saturday, there was plenty for Ole Miss fans to be good about on one side of the ball.

The Rebels dropped their season opener to No. 5 Florida, 51-35, but the offense was on a near record-setting pace under new offensive coordinator Jeff Lebby.

Against a vauted Gator defense, the Rebels racked up 614 total yards of offense and five touchdowns.

A preseason battle between quarterbacks Matt Corral and John Rhys Plumlee was seemingly settled by the first snap of the game. Corral got the start under center and commenced to have a career day.