Auburn vs. Ole Miss: 3 Things We Learned From Each Team 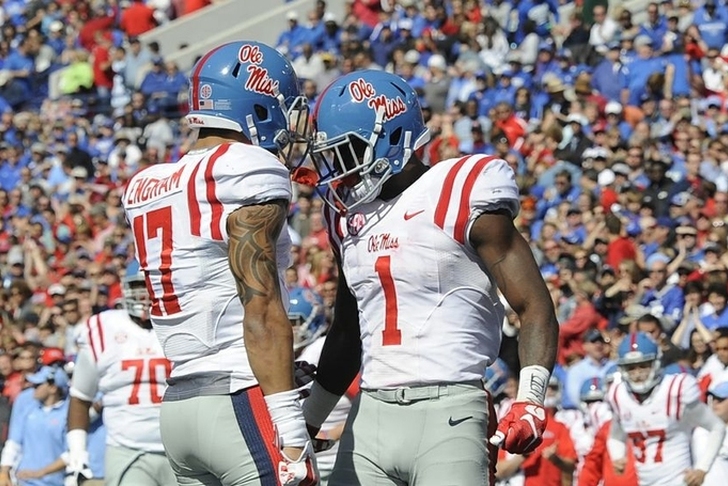 The Ole Miss Rebels stayed in first place in the SEC West with a 27-19 victory over Auburn on Saturday afternoon, keeping them in control of their own destiny in the SEC. Here are three things we learned from both teams in the game:

Chad Kelly is still inconsistent. He looked great for most of this game, passing for 381 yards and two touchdowns, but we also saw the negative part of his game with two interceptions, giving him 12 on the season. That won't be good enough to get them past some of the better teams left on their schedule.

The defense has figured it out. Sure, this game was against Auburn, but the Ole Miss' defense that looked uncharacteristically bad against Memphis and Florida has returned to normal. The Rebels have given up a combined 22 points in the past two games, showing that they've found their stride.

Laquon Treadwell is everything for this offense. Whether it's making big plays catching the ball (114 receiving yards, TD) or getting others open by drawing the attention to the entire opposing defense, Treadwell has dictated the success of Ole Miss' offense.

Sean White is not the answer at quarterback. White finally through his first touchdown pass of the season in his fifth career start, but completed just 12 of 28 passes and through an interception. Don't be surprised to see Jeremy Johnson back in the starting lineup next week.

Peyton Barber's reign of terror is over. Barber had racked up an insane 11 rushing touchdown over the past three games, but only got eight carries for 17 yards in this one.

The defense is making strides under Will Muschamp. The Achilles heel of this team for most of the season, the Tigers limited an explosive Rebels offense to just 27 points and forced two turnovers. If they can keep that up, they'll be back at the top of the SEC next year.