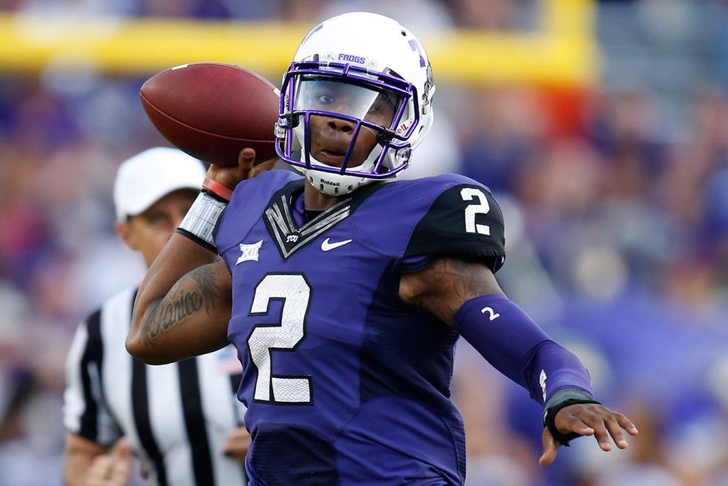 The TCU Horned Frogs appeared to be half-playing the Ole Miss Rebels and half-playing the College Football Playoff committee on Wednesday, absolutely crushing Ole Miss 42-3 in an absolute statement of a Peach Bowl victory.

The entire first half was one massive turning point for one-loss TCU, as they held the Rebels to just 59 yards over the span of 10 extremely short drives. The Horned Frogs' offense, in contrast, was efficient as ever, scoring 14 in the first and 14 in the second to take a commanding 28-0 lead into halftime.

The 42 points that TCU scored in the game's first 39 minutes equals 25% of what Ole Miss had given to its opponents all regular season long, per USA Today's Paul Myerberg.

However, the Horned Frogs' entire defensive unit was the real star of this game. They made Bo Wallace look like a sophomore transfer out of the Sun Belt conference all day long, rather than the dark horse Heisman candidate who led the Rebels to prominence early in the campaign. An absolutely breathtaking performance for TCU's D with four turnovers forced (three INTs, one fumble) on the day.

No one. You can give a half game ball to the secondary for picking Boykin off three times, but neither the Rebels' offense nor defense was game in this one when it counted.

TCU's final ranking will be very interesting to look at, with the currently #5 Horned Frogs finishing a 12-1 campaign with a beyond-impressive blowout of an SEC opponent.

Ole Miss, on the other hand, finishes the season 9-4 and will attempt to shake off the bitter taste of today's game by focusing all on the progress the program made in 2014.