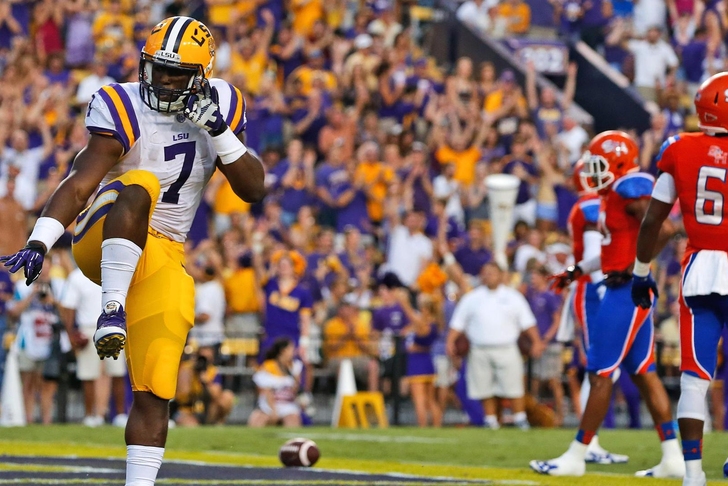 The #3 Ole Miss Rebels and #24 LSU Tigers traded defensive stop after defensive stop on Saturday, with each team's offense unable to assert themselves for the majority of the game.

Down 7-3 in the fourth quarter, LSU finally put it their attack together for a crowd-igniting go-ahead TD drive. LSU would hold on for dear life to pick up the huge 10-7 upset victory in front of their home faithful in Baton Rouge.

Turning Point: LSU QB Anthony Jennings executed the play-action fake to end all play-action fakes with just over 5 minutes left, rolling to his right before hitting TE Logan Stokes for the go-ahead TD.

That 3-yard connection gave the Tigers to lead the stay at 10-7 and marked Stokes' first reception of 2014. What a big time to get on the stat sheet.

Ole Miss quarterback Bo Wallace completed well under 50% of his passes on Saturday. Credit the LSU defense for putting massive pressure on both Ole Miss' receiving corps and Wallace, frustrating the Rebels' signal caller all day long en route to the Tigers' victory.

With his arm proving ineffective, Wallace would try to use his legs on a quick 4th-and-1 QB sneak on Ole Miss' final drive. LSU would read it perfectly, stopping Wallace short of the marker.

Wallace would have one more chance with under 80 seconds to go and the ball at the LSU 25. He would drive the Rebels all the way to the LSU 25, thanks in part to a huge pass interference call on a fourth-down play.

However, a crucial delay of game penalty would prompt head coach Huge Freeze to pass on a potential game-tying 47-yard field goal attempt. Bo Wallace would throw a pick on a heave-and-a-prayer Hail Mary attempt with 9 seconds left, sealing a thrilling victory for LSU and a heartbreaking loss for the Rebels.

The Ole Miss defense did everything in its power to safe the Rebels' undefeated season. They forced two turnovers by air and two by land, staying one step ahead of the LSU offense for the majority of the night. If anything, the Rebels' D proved that it belongs playing on college football's biggest stages.

You could very well hand this award to the entire LSU defense. However, Fournette and Magee provided the majority of the Tigers' offense on this night - slashing and pounding through the Ole Miss front seven to give LSU hope, despite each of the Tigers' halfbacks fumbling it away on one occasion.

What's Next? Ole Miss will look to regroup, welcoming in the Auburn Tigers for another marquee SEC matchup next Saturday (kickoff TBD). LSU will be all smiles during their bye week before hosting Nick Saban's Alabama Crimson Tide on November 8th (kickoff TBD).