3 Reasons Why Ole Miss Will Beat Alabama This Weekend 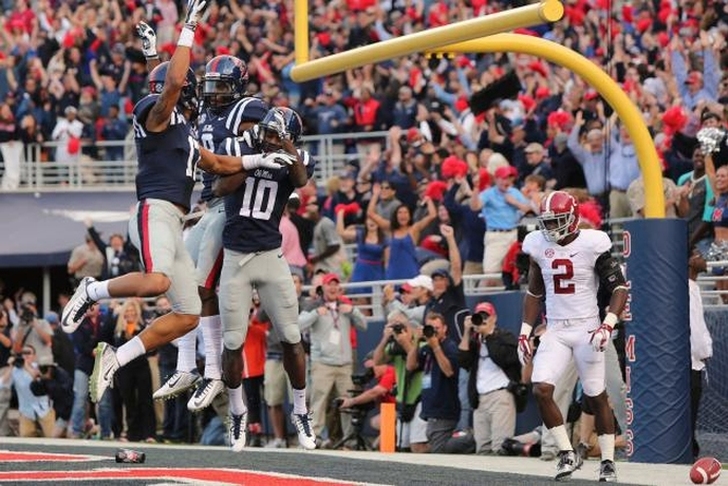 The Ole Miss Rebels shocked the college football world by upsetting Alabama last year, and now they're trying to repeat that feat in Tuscaloosa. While some might think that's an impossible task, we know better. Here are three reasons why the Rebels will beat Alabama for the second consecutive year:

Alabama still hasn't quite figured out their quarterback situation, which doesn't bode well for the offense. Jake Coker and Cooper Bateman have combined for just three touchdown passes and two interceptions through the first two games, showing how much the Tide rely on their running game. Running back Derrick Henry is a bonafide Heisman candidate, but if Alabama's passing game struggles continue, they will have a hard time moving the ball.

Now watch: ARE YOU IN? This NEW Ole Miss Football Hype Video Will Give You Chills

Ole Miss had the top scoring defense in the country last year, and with eight starters returning from that unit, they've remained among the nation's elite so far in 2015. They've only allowed 12 points per game this season, most of which was come in garbage time. Alabama is going to have to be at their best offensively if they expect to have a chance, and the uncertainty at the quarterback position will keep them from doing that.

1) Most explosive offense in the country

Ole Miss is averaging an eye-popping 74.5 points per game so far this season, and became the first team in SEC history to start a season with two straight games scoring 73 or more points. Quarterback Chad Kelly has been everything the Rebels could have envisioned, passing for 557 yards and six touchdowns in his first two games as a starting quarterback. Running backs Jaylen Watley and Eugene Brazley both have rushed for over 100 yards and two touchdowns this season, while wide receivers Cody Core and Quincy Adeboyejo have combined for 329 receiving yards and six touchdowns - and we haven't even mentioned No. 1 target Laquon Treadwell, or that defensive tackle Robert Nkemdiche has two offensive touchdowns this year.

The Rebels are just ridiculously loaded with offensive weapons and will come at Alabama's defense from every which way, allowing them to pull away with the victory.