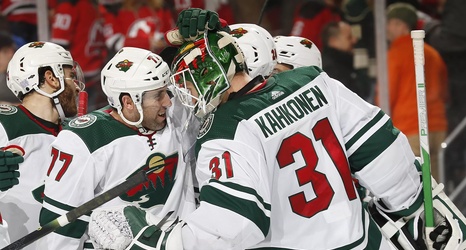 It was a night of firsts for the Minnesota Wild. They were able to hold onto a third-period lead for the first time on the three-game road swing and, more importantly, rookie goaltender Kaapo Kahkonen earned his first career win in his first NHL start.

The Wild and New Jersey Devils traded goals back and forth in the first two periods, but earned their victory in the third period by scoring the lone goal of the frame to secure a 3-2 win at the Prudential Center.

The scoring started seconds into the first power play of the night, as Ryan Suter sent a simple wrist shot to the net, setting up an odd deflection by Zach Parise to beat Devils goalie Louis Domingue for the first goal of the game.