Recap: Wild continue to lack offense in 5-2 loss to Jets 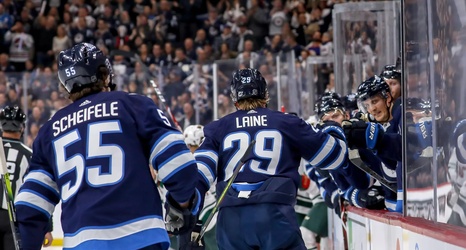 The Minnesota Wild tried to play the role of spoilers Thursday night as the Winnipeg Jets were celebrating their first home game of the season. Unfortunately, they were unable to spoil the fun in Manitoba as the Jets came away with a 5-2 victory in what was a closer game than the final score indicates.

For the first time this season, the Wild scored the first goal. Ryan Hartman scored his first goal in a Wild sweater to open the night’s scoring. Hartman forced a turnover from 18-year-old Ville Heinola (whom was the first player born in the 21st century to score an NHL goal on Tuesday night) and surprised Connor Hellebuyck with a quick shot, beating the Jets netminder through his five-hole.