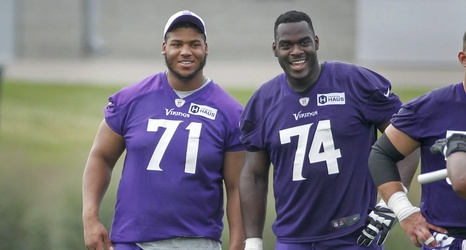 When the Vikings opened training camp, the expectation was that the starting offensive line would eventually work out to be LT Christian Darrisaw, LG Ezra Cleveland, C Garrett Bradbury, RG Wyatt Davis, and RT Brian O’Neill. It could still end up being that way eventually, but it seems more likely, after ten days of training camp, that the starting line-up may prove to be a bit different on opening day five weeks from now. In particular, it now looks like the rookies may not be the shoe-ins many people thought to take up starting jobs- at least not week one.