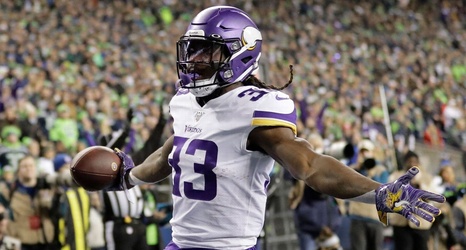 SEATTLE -- Minnesota Vikings running back Dalvin Cook suffered an injury to his right shoulder in the third quarter of Monday night's game against the Seahawks and is questionable to return.

Cook was injured on the first play of the Vikings' second drive after halftime. Upon receiving a handoff at the 8:56 mark, Seattle defensive end Rasheem Green punched the ball free from Cook's arm, forcing a fumble. Cook was tripped up and fell to the ground, where he remained for several minutes and looked to be in apparent pain while being tended to by athletic trainers on the field.