Vikings' big question: Stefon Diggs, Adam Thielen and then who? 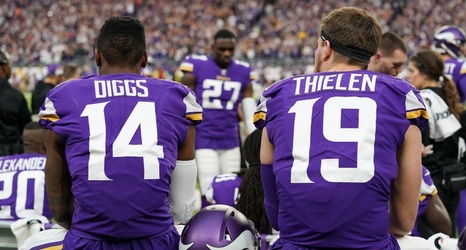 EAGAN, Minn. -- Nine players not named Stefon Diggs or Adam Thielen are competing for the remaining three or four receiver spots on the Minnesota Vikings' roster.

There’s a handful of familiar faces, from Chad Beebe to Laquon Treadwell, and several new candidates in the mix between ex-Broncos wideout Jordan Taylor and seventh-round picks Bisi Johnson and Dillon Mitchell.

The sheer number of pass-catchers with different skill sets should benefit Minnesota in determining the group’s makeup behind its top two receivers. But the early reviews haven’t been all that positive.