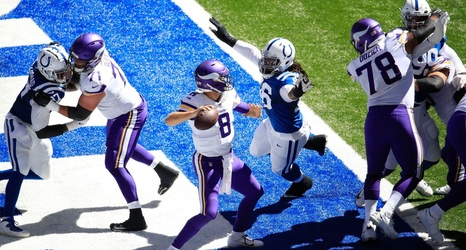 (WCCO)- Following Sunday’s 11-26 for 113 yards and three interception performance, there has been plenty of discussion about Vikings quarterback Kirk Cousins and what has gone wrong for the offense. An 0-2 start to the season and just 13 first half points combined between those two games indicates that the unit has not found a rhythm yet under offensive coordinator Gary Kubiak.

For NFL on CBS analyst James Lofton, there are several issues he’s seen over the team’s first two games, items that he terms “leaks,” that are dragging the unit down. The first half scoring is one and also the injury to starting right guard Pat Elflein, which forced second-year player Dru Samia into the lineup.