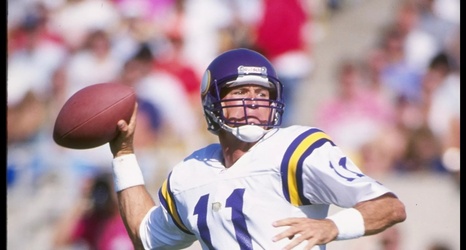 On Friday, a great number of Minnesota Vikings fans lost a big link to their early days as fans of the purple.

News came down earlier today that former Vikings’ quarterback Wade Wilson has passed away. His death comes on his 60th birthday.

Wilson was drafted by the Vikings in the eighth round of the 1981 NFL Draft out of East Texas State. He served mainly in a backup capacity for the Vikings until 1987, when he started seven of the twelve games played by the team’s “regular” players. The 1987 season was interrupted by a player’s strike, which saw the cancellation of one week’s worth of games and three weeks of games played by “scabs,” or non-union players.