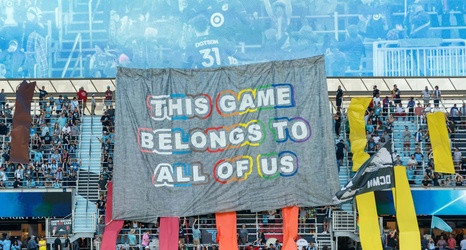 Minnesota United’s Pride game got underway with a tifo made by the supporters. The large tapestry was hoisted up as strips of the rainbow were rolled up the Wonderwall.

The Portland Timbers got on the board first right from the kickoff after just 14 seconds.

The Loons then scored three unanswered goals and had a 3-1 lead at the break. Portland then bounced back with three more of their own and took the 4-3 lead in the 65’ after an own goal by Minnesota United defender Kemar Lawrence.

Luis Amarilla bagged his second goal of the day and secured a point for Minnesota in the 4-4 draw.