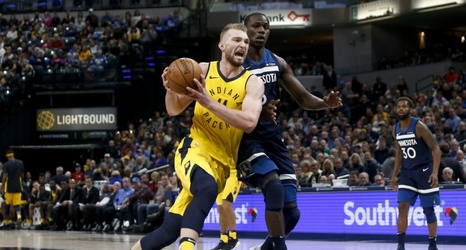 INDIANAPOLIS, IN - DECEMBER 31: Domantas Sabonis #11 of the Indiana Pacers drives to the basket against Gorgui Dieng #5 of the Minnesota Timberwolves during the second half at Bankers Life Fieldhouse on December 31, 2017 in Indianapolis, Indiana. NOTE TO USER: User expressly acknowledges and agrees that, by downloading and or using this photograph, User is consenting to the terms and conditions of the Getty Images License Agreement. (Photo by Michael Reaves/Getty Images)

The Minnesota Timberwolves have been the worst team in the NBA for essentially the entire season. Unfortunately for them, it is unlikely that they retain their draft pick (only a 40-some-percent chance).