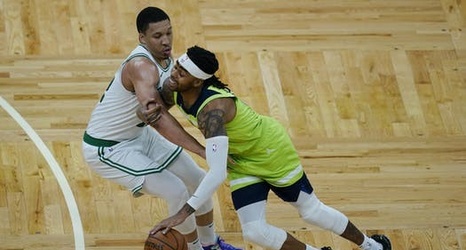 The Timberwolves appeared to have a minutes restriction in place again for D'Angelo Russell in Friday night's 145-136 loss to Boston, since Russell again wasn't in the starting lineup nor the lineup that came out for the second half.

But when the game went into overtime, the minutes restriction became a little more flexible. It got to overtime only because Russell helped send it there with eight points in the final 90 seconds of regulation, including a banked-in, tying three-pointer with 9.7 seconds remaining.

It was the third consecutive game Russell hit shots down the stretch after helping the Wolves distance themselves from the Kings in a Monday win, almost led them back against Indiana on Wednesday and nearly did it again Friday against the Celtics.