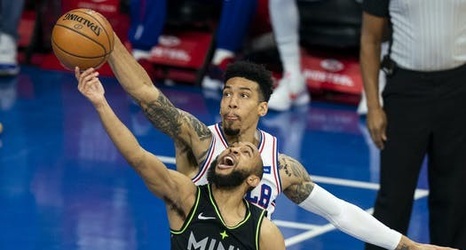 PHILADELPHIA — The Timberwolves were without Malik Beasley (left hamstring soreness), Ricky Rubio (back spasms), D'Angelo Russell (left knee) and lost Jaylen Nowell to an apparent right ankle injury in the first half in their 122-113 loss to the 76ers on Sunday.

In part because of all the players the Wolves were missing, coach Chris Finch played three starters, — Anthony Edwards, Jordan McLaughlin and Karl-Anthony Towns — more than 40 minutes.

Towns played 44 of those minutes on his way to 39 points and 14 rebounds. To hear Finch explain it after the game was to hear shades of Tom Thibodeau.