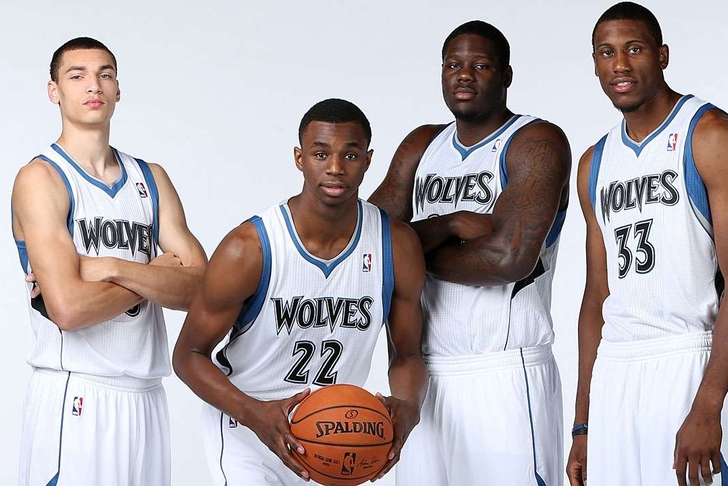 The Minnesota Timberwolves went 40-42 last year, good for 10th in the Western Conference, but could have been more competitive for a playoff spot if it wasn't for their 6-13 record in games decided by four points or less. It was the 10th straight year Minnesota had failed to qualify for the playoffs, extending the longest such drought in the NBA.

It only got worse for the T-Wolves in the offseason. First, head coach Rich Adelman decided to retire, prompting Flip Saunders to come down from the front office and name himself head coach. Then they used their first round pick on UCLA product Zach LaVine, who didn't seem too thrilled about going to Minnesota. Finally, in the biggest blow of all, franchise centerpiece Kevin Love finally forced his way out, as Minnesota traded him to Cleveland to join LeBron James.

In return for Kevin Love, the Timberwolves did get the past two No. 1 overall picks - Anthony Bennett and Andrew Wiggins - as well as Thaddeus Young from the 76ers. Those young guys should give Minnesota fans hope for the future, but the franchise will probably take a step backwards this year.

The Timberwolves need to find a way to replace the production on Kevin Love, which won't be easy to do. Wiggins is expected to pick up a good portion of the scoring load (even though he's still a raw offensive player), and they need to get more production from a bench unit that was fifth-worst in the NBA in scoring last year. The additions of LaVine, Bennett, and free agent Mo Williams should help in that regard.

Ricky Rubio has proven to be a great passer (averaged 8.6 apg last season) and good defender (finished 2nd in the NBA in steals per game), so why are there still questions about his worth as a player? The main reason is his atrocious 36.2% career shooting percentage, putting him pace to be the worst percentage shooter in NBA history. He has to vastly improve his offensive game if the Timberwolves are going to have any sort of success this season.

Minnesota is talented, but it's all young talent that hasn't had a chance to play together yet. In a loaded conference, it's going to be tough for the Timberwolves to compete with teams like Nuggets, Kings, Pelicans, and Suns. They'll likely finish anywhere between 12th-14th in the West, and I have them 14th.

How do you think Minnesota will do this season? Is Andrew Wiggins the real deal? Tweet your thoughts to@brauf33 and leave a response in the comments!