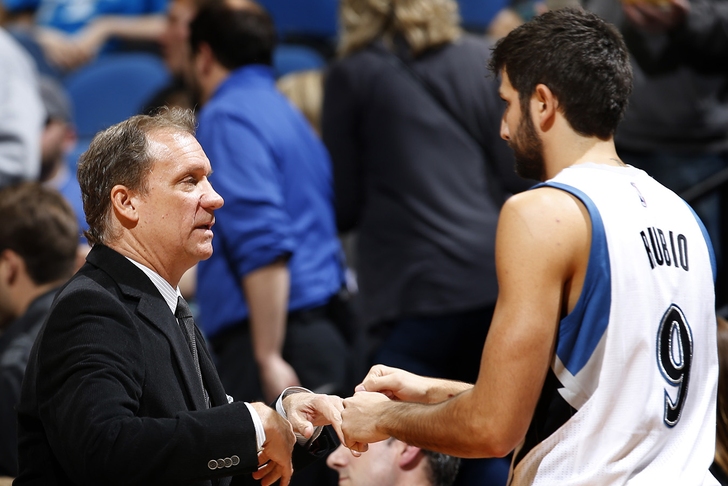 Can't get enough Timberwolves news? Be sure to download our 5-star iPhone app today!

The Minnesota Timberwolves initially offered guard Ricky Rubio four years at $44 million, imploring him to take a discount so the team would have flexibility to add pieces in the offseason.

However, Rubio's camp remained staunch in their desire to get their man paid. That led to, by multiple sources' accounts, tense and contentious contract negotiations that finally ended with Rubio picking a four-year deal valued at $55 million.

The nature of the negotiations naturally bled over just a little, seeing that head coach Flip Saunders also acts as the team's GM.

"Dealing with the GM, it's always tough," Rubio told the Associated Press, via NBA.com. "But if you only see him in the office, that's good. But then you have to see him in the practice, it's a little tougher.

"But I think Flip handled the thing very well. He was not different, but when we're out on the court, we were only talking about basketball. We didn't talk about business in the practice facility. That helped me to feel comfortable."

Saunders was more succinct on the matter.

"We didn't always see eye to eye, which is always good and the way it goes with agents," Saunders said on Saturday. "We worked hard because I think all parties involved knew that the No. 1 thing that Ricky wanted is Ricky wanted to be here."

The awkwardness of Saunders having to play multiple roles during the Rubio extension process seems to have subsided, with both parties happy that a deal is out of the way.