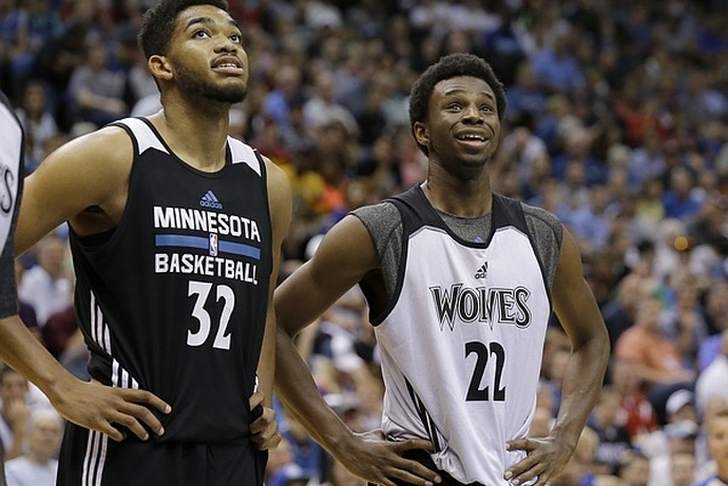 The Minnesota Timberwolves finished with the worst record in the league last year, but with a plethora of talented young prospects, this team is poised to start showing signs of major improvement. Here are three reasons to be optimistic about the T-Wolves this season:

Minnesota had the cap space to bring in some veteran free agents this offseason, but they instead elected to give playing time to all of their young players. Andrew Wiggins, Zach LaVine, Karl-Anthony Towns, and Tyus Jones will all see major, major minutes right away this season. The Timberwolves are hoping this young core can learn from experience and develop quicker by being on the court, even if it means losses in the immediate future.

2) Kevin Garnett is here to mentor the young guns

Garnett decided to push off retirement one more season to remain on the roster, choosing to use his experience to help Minnesota's young talent - specifically Karl-Anthony Towns. Expect Garnett to take a reduced role on the court, but will be as present as ever off of it.

1) Did we mention Adrew Wiggins and Karl-Anthony Towns?

The past two No. 1 overall picks in the NBA Draft are ready to take the league by storm. Wiggins, who won Rookie of the Year last year, is already one of the best wing defenders in the league and has an ever expanding offensive game. Towns is expected to have a similar impact on the defensive end as Minnesota's rim-protector while giving them a consistent low-post scorer who is working on expanding his range.

This season is all about the progression of Minnesota's young players, so watching these two future stars develop will be most intriguing and exciting part of the year for Timberwolves fans.