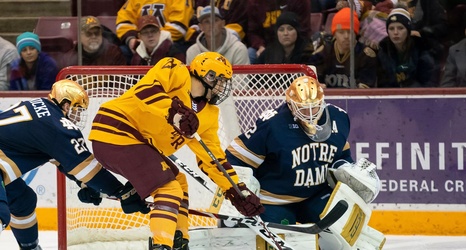 The Minnesota Golden Gophers hockey team heads to South Bend for a critical road series against the Notre Dame Fighting Irish this weekend that could make or break their season. Minnesota currently sits in a three-way tie for second place in the Big Ten with Ohio State and Michigan State just two points behind first place Penn State. Minnesota’s opponents this weekend sit in fifth place—currently outside of home ice position for the Big Ten Tournament, but only three points behind the three teams in second place. There is no real margin for error as the last three weekends of the regular season play out for any of ythe above teams, so all will need to be on their game.