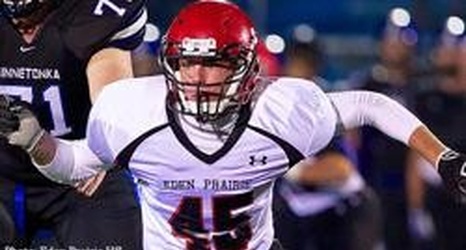 Minnesota has nine in-state football commits with eight of them playing this year, and they finished 6-2 in their respective season openers. The group is part of an extremely strong local Class of 2016. Periodically, we will look at the newest recruits with previews, so fans can catch them before they hit TCF Stadium.

Carter Coughlin, a 6-foot-4, 212-pound linebacker, picked Minnesota over Oregon and Ohio State. He has helped lead the Eagles to their third state title and they are the prohibitive favorite to win another Class 6A championship.

Eden Prairie defeated Totino-Grace 38-20 Saturday. The two teams meet in the 2014 Class 6A title game with Eden Prairie winning 28-27 as Totino-Grace went for a two-point conversion in the closing seconds.