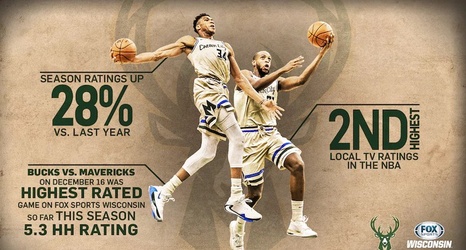 Last season, Bucks ratings on FOX Sports Wisconsin saw an increase of 32%, which means the team has seen a 60% increase over the last two seasons and a spike in viewership that is the highest in nearly 20 years.

According to Nielsen Media Research, the Bucks generated a 5.3 household rating against the Dallas Mavericks on December 16, making it the highest-rated regular season Bucks game on FOX Sports Wisconsin since 2010.