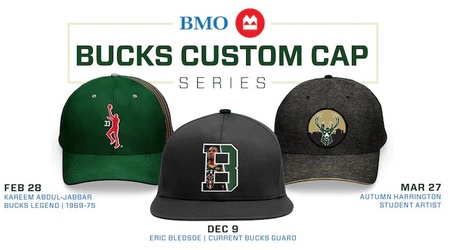 The BMO Harris Bucks Custom Cap Series, returning for its second season, will feature caps designed by Kareem Abdul-Jabbar, Eric Bledsoe and Autumn Harrington, a local student from Concordia University. Each cap will be given away to the first 10,000 fans on three dates during the upcoming 2019-20 Bucks season at Fiserv Forum.

Bledsoe’s cap will be given away on his birthday, Monday, Dec. 9, when the Bucks host the Orlando Magic. The cap has a 3D version of his personal logo on the front with the number “60” on the back to commemorate the Bucks’ 60-win season in 2018-19.