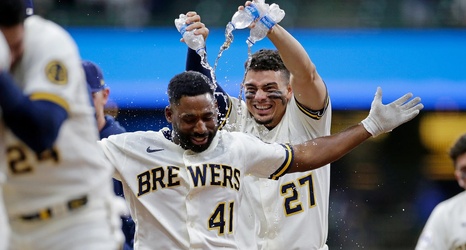 Thursday afternoon’s series finale between the Milwaukee Brewers and San Diego Padres began as a pitcher’s duel but ended with offensive fireworks, as both teams put a licking on the other’s bullpen. Adrian Houser started for Milwaukee and pitched five scoreless frames, allowing just one hit and one walk. He punched out four and induced six ground ball outs to two flyouts. Ryan Weathers opened things up for the Padres; he’s gone back and forth a bit with his role this season — his first in the big leagues, at age 21 — and worked four scoreless frames on 78 pitches, allowing one hit and a pair of walks while fanning five.