Struggling offense showing signs of breaking through for Milwaukee Brewers 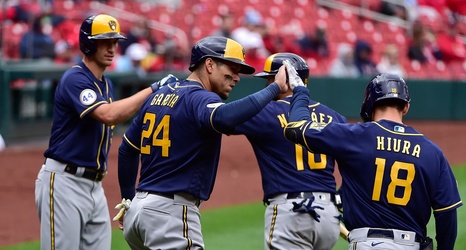 The Milwaukee Brewers offense has been as awful as anyone could possibly imagine to start the 2021 season. The Crew entered their current series against the Cardinals dead last in wRC+ (48), 29th out of 30 teams in slugging (.276) and on-base percentage (.239), 27th in strikeout rate (32%), and 24th in runs scored (19). This collective awfulness has resulted in the Brewers wasting some phenomenal outings from a starting rotation that has been one of the best in baseball in the early going of the season.

While the high strikeout totals stood out as a glaring issue, Milwaukee’s offensive deficiencies were compounded by their inability to make solid contact when they did put the ball in play.