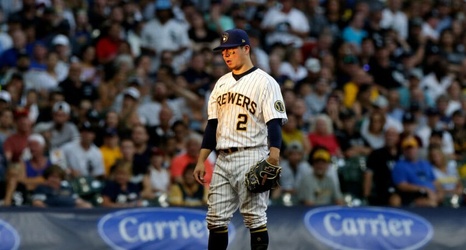 MILWAUKEE, WISCONSIN - JULY 24: Luis Urias #2 of the Milwaukee Brewers looks on during the game against the Chicago White Sox at American Family Field on July 24, 2021 in Milwaukee, Wisconsin. Brewers defeated the White Sox 6-1. (Photo by John Fisher/Getty Images)

For most of the first part of the season, third base looked like one of the most glaring needs for the Milwaukee Brewers to address on this roster. However, they sort of have addressed the position similar to how they addressed first base this offseason: By acquiring an up-the-middle player and moving someone else to the area of need.