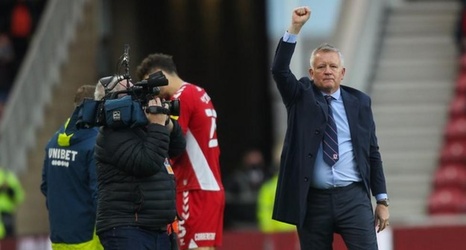 New Middlesbrough boss Chris Wilder had to settle for a point from his first game in charge as his side were pegged back by Millwall at Riverside Stadium.

Boro made the stronger start and took the lead after 15 minutes, as Duncan Watmore's cross deflected to Matt Crooks, who steered his header home at the back post.

Millwall had lost just two of their previous 13 Championship games and responded well as Benik Afobe's shot from eight yards was cleared but bounced in off the unfortunate Sol Bamba for an own goal.

In the second half, Boro scrambled the ball clear when Millwall defender Daniel Ballard headed across goal from a free-kick, before Lions keeper Bartosz Bialkowski tipped away a powerful Marcus Tavernier strike after the midfielder cut inside.