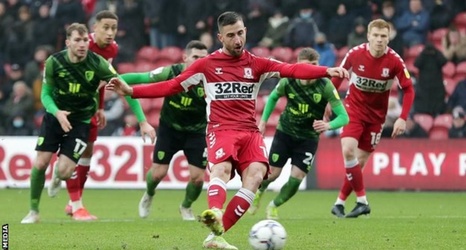 Andraz Sporar scored from the penalty spot as Middlesbrough moved closer to the Championship play-off places with victory over second-placed Bournemouth, who missed the chance to go top.

The Slovenian striker calmly slotted home the only goal of the game early in the second half after Isaiah Jones was brought down by Jaidon Anthony.

Bournemouth created plenty of chances to get something out of the match but Anthony, Dominic Solanke and Ryan Christie were all guilty of wasting clear opportunities.

The Cherries would have gone above Fulham with victory at the Riverside, with the leaders not playing until Monday, but Scott Parker's side have stumbled since the end of October.