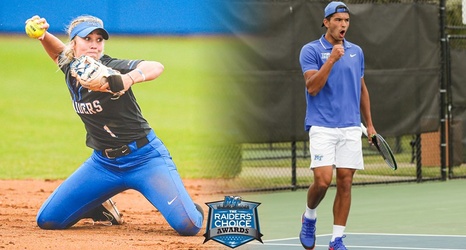 MURFREESBORO, Tenn. – Softball's Summer Burgess and tennis's Francisco Rocha were the big winners at the 10th Annual Raiders' Choice Awards on Tuesday night broadcast on Facebook.com, Twitter and TrueBlue TV. The year-end "Academy Awards" style show highlighted all the academic and athletic accomplishments of the Blue Raider student-athletes for the 2020-21 academic year.

Burgess and Rocha were honored with the True Blue President's Award, which is the highest honor bestowed upon a current MT student-athlete who epitomizes all that is good in intercollegiate athletics. Presented annually to one male and one female student-athlete, the President's Award recognizes outstanding academic and athletic accomplishments, university/community service and leadership.