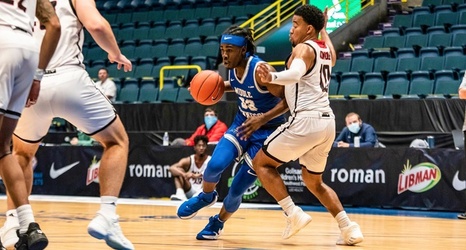 ESTERO, Fla. – After an offseason unlike any other, Middle Tennessee may have been more excited to get the 2020-21 season started this week than anyone as a host of new players were ready to get back on the court while the Blue Raider returners hoped to begin re-writing the narrative from the previous season.

After their Wednesday opener against Akron was canceled, MT was forced to wait yet another day and tasked with facing an Omaha Mavericks team that already had a chance to work out some kinks the day before. The Mavs' one day head start may have been just enough, as they clinched a 60-59 heartbreaker in the final seconds to hand Blue Raider Head Coach Nick McDevitt his first season opening loss at MT.