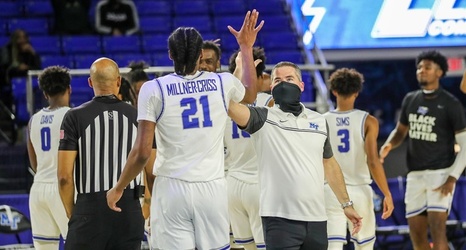 MURFREESBORO, Tenn. — A slow start couldn't keep Middle Tennessee from its first win of the young season Wednesday at the Murphy Center.

The Blue Raiders (1-2) returned home after starting the campaign at the Gulf Coast Showcase in Estero, Florida, to play host to longtime rival Murray State (1-1) and turned in their best performance yet, winning 78-61.

It was quite a different feeling for MT than a season ago when it lost at Murray State 85-52.

"I was really proud of our team tonight. I thought we put together a full 40 minutes on both sides of the ball," head coach Nick McDevitt said.