Pierce making sweet music on and off the field 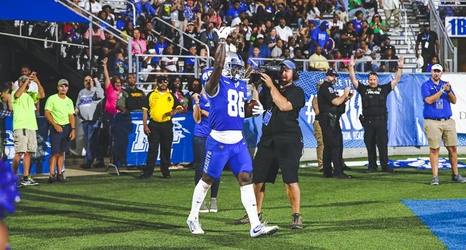 MURFREESBORO, Tenn. — Through two games of the 2019 season, it's clear Middle Tennessee wide receiver Jarrin Pierce has built a connection with his teammates and coaches on the field. Off the field, that connection spreads.

The 5-11, 185-pound speedster from Los Angeles transferred to MT this season after two successful years at College of the Canyons, a community college in Santa Clarita, California.

He's proven why he was a priority target for the Blue Raiders. After two games, he's second on the team in receptions (8) and receiving yards (100), and leads the way with two touchdown grabs.