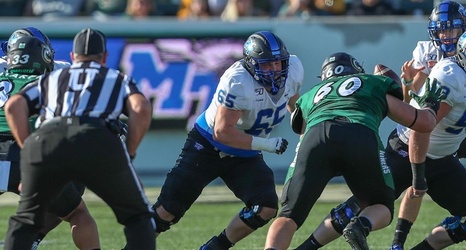 DALLAS – Conference USA has announced its 2019 All-Freshman football team, as selected by the league's 14 head football coaches, and Middle Tennessee's Marcus Greer was one of the 28 players honored.

Greer, an offensive lineman out of St. Louis, MO, played and started 10 games in 2019. He allowed just two sacks all season while playing a total of 510 snaps. Greer, who earned the team's offensive player of the week award once during the year, was part of an offensive line that produced the top rushing attack in conference play.

Greer missed the ODU and WKU games after suffering an injury against Rice.