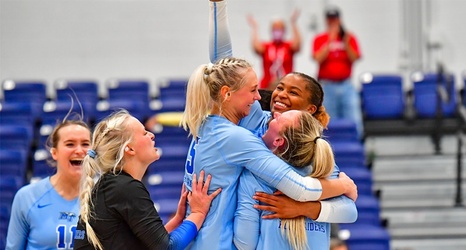 NORFOLK, Va. – The Blue Raiders swept North Texas Friday afternoon and are moving onto the Semi-Finals for the first time since 2011. They will play number one seeded Rice tomorrow at 11 a.m. CT.

The Blue Raiders showed up collectively and earned their biggest win of the season when it mattered most. The freshly named Libero of the Year, Marley Banton, dug up 25 digs for an incredible 8.33 digs per set. Banton moved up to sixth in career digs during the 25-point rally scoring era with a total of 820. Taylor Eisert showed up huge with her 11th double double that included 36 assists.