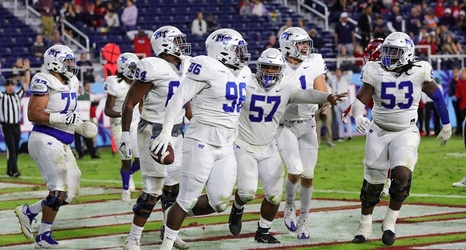 BOCA RATON, Fla. — Middle Tennessee football had a comeback for the ages on Saturday night, scoring 24 unanswered points after falling behind 17-3 to earn its sixth win of the season, 27-17 at Howard Schnellenberger Field at FAU Stadium.

With the victory, Middle Tennessee earned bowl eligibility for the first time since the 2018 season, where the Blue Raiders competed in the New Orleans Bowl. It was also Rick Stockstill's 100th victory as a head coach.

Mike DiLiello was effective in relief of Nicholas Vattiato, completing 11-of-18 passes for 127 yards and a touchdown, while also rushing for 43 yards a touchdown.