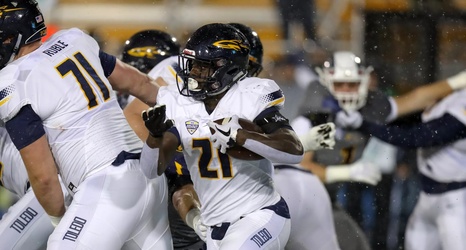 Football is a game of inches, and those inches proved crucial in the first midweek MACtion game of 2019.

With 5:27 left, Kent State quarterback Dustin Crum completed a goal line pass to tight end Keenan Orr in the end zone. Trailing by two in the aftermath, Kent State needed one more end zone appearance to tie things at 35 apiece. Crum faked a handoff, spun around, and attempted to power his way through several Toledo defenders. When he hit the ground, the ball was nearly touching the goal line, but Crum fell just short.