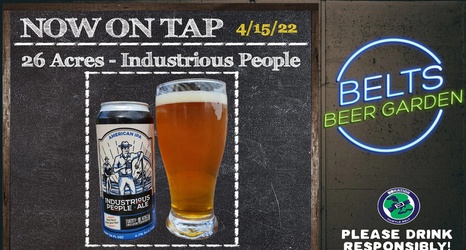 If you travel just 30 minutes northeast of Charlotte, North Carolina, you’ll find the city of Concord. Concord is home to nearly 80,000 people and Twenty-Six Acres Brewing…which is *the* place for “High Performance Brewing” in the Tar Heel State and has been for more than six years now.

The team at Twenty-Six Acres loves variety so, while they have some mainstay brews that take up their 15 barrel system, they also have a separate 2 barrel pilot system just for experimental, seasonal, and limited-release beers.

However, as this is the first time they’ve been featured on BBG, I chose one of their year-round brews to share today - Industrious People.