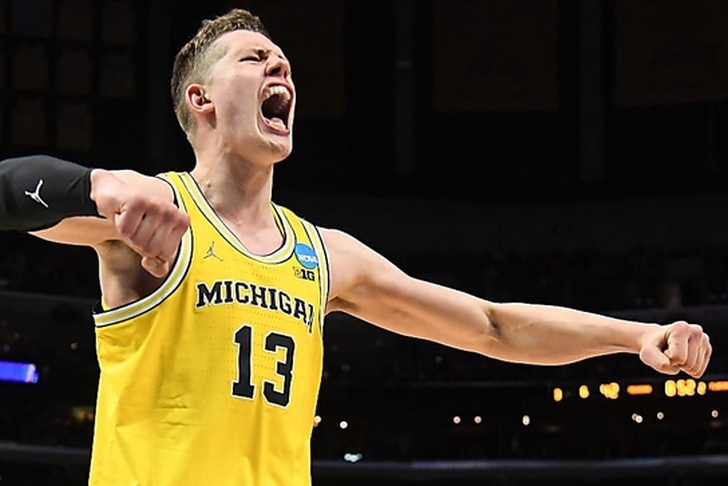 Led by a monster performance from star big man Moe Wagner, the Michigan Wolverines have advanced to the national championship game with a 69-57 win over Loyola-Chicago.

With the rest of the team struggling from the field in the first half, Wagner kept the Wolverines in the game with a double-double in the opening 20 minutes. He then continued his outburst in the second half to lead Michigan to victory, leading both teams with 24 points and 15 rebounds (a career-high).

Early on, Michigan took advantage of Loyola's cold shooting, building a 12-4 lead as the Ramblers went nearly eight minutes without making a field goal. However, Loyola finally managed to find their offense while ramping up their defense to close the half on a 25-10 run and took a 29-22 lead into the break thanks to Donte Ingram's halftime buzzer beater.

Loyola was able to maintain that lead during the early part of the second half, leading by 10 points on two different occasions before their offense went cold again. Wagner took over for Michigan, leading the Wolverines on a 20-4 run as they took a 54-47 lead.

From there, Michigan was able to build a double-digit lead and made their free throws down the stretch to hang on for the victory.

Charles Matthews also contributed 17 points and was the only other Michigan player to score in double figures. Duncan Robinson added nine points off the bench as the Wolverines remain undefeated in games in which he has scored at least six points this season.

Loyola was led by freshman big man Cameron Krutwig, who had 17 points and six rebounds. It was the first game in the tournament where the Ramblers lost the rebounding battle.

Michigan now advances to the national championship game, where they will face the winner of the second Final Four game between Villanova and Kansas. That game will be played on Monday at 9:20 p.m. ET on TBS.

Catch up on all the latest college basketball news and rumors in the best sports app available - the Chat Sports App!