'We were due for one': Michigan's offense explodes in Hollywood 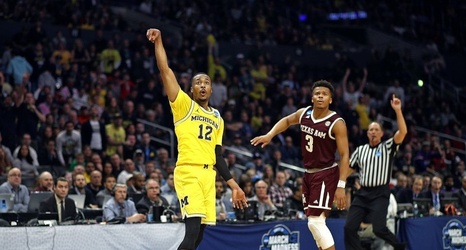 LOS ANGELES -- For many, Michigan's first two NCAA Tournament wins were unsatisfying. Playing in Dorothy's backyard, the Wolverines piled up enough bricks to build their own maize brick road. Where was the offensive mojo that propelled Michigan to a Big Ten Tournament title in New York?

Apparently, it was waiting for the Wolverines on the opposite coast.

Thursday in Los Angeles, Michigan made 10 first-half 3s, shot 62 percent for the game, and scored 99 points in a 27-point victory over Texas A&M.

"It felt like we ran into a buzz saw," A&M head coach Billy Kennedy said.